Contrary to what many people believe, the opiate epidemic sweeping our nation is not due to illegal narcotics. In large part it is being driven by the prescription pads of physicians. By turning to opiates in attempting to relieve our pain, the United States is leading the world in the consumption of prescription painkillers, and more and more people are dying from this epidemic. The National Institute on Drug Abuse reports that although the U.S. accounts for 5% of the world’s population, it consumes 75% of the world’s prescription drugs. From 1999 to 2010, death rates from prescription opioid pain relievers quadrupled across the nation. 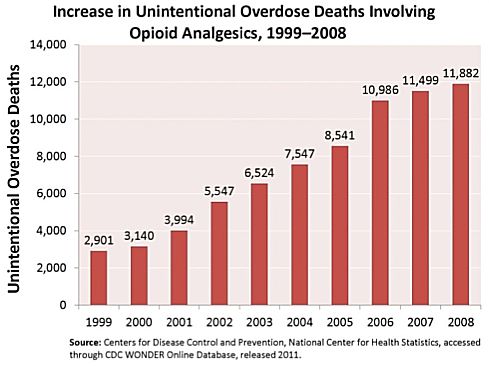 Opioid pain relievers were involved in 14,800 overdose deaths in 2008. That number is more than the number of overdose related deaths caused by heroin and cocaine combined in that same year.

The way we view and treat pain in the U.S. has changed over the last 20 years. There has been a movement to make sure that pain is adequately treated. In hospitals and physician offices it has become routine to rank pain on a sliding scale of 1-10, and doctors often feel compelled to offer stronger drugs to treat that pain. As a result, more and more prescriptions are being written for opioid painkillers.

How out of control has it become? The CDC reported that enough prescription painkillers were prescribed in 2010 to medicate every American adult around-the-clock for one month.

There is no doubt that powerful opioid painkillers like Vicodin, Percocet, and OxyContin bring a great deal of relief to those suffering from acute pain. They are also highly addictive and susceptible to abuse. Long-term use leads to a resistance build up. As their body’s resistance builds, some users will seek multiple prescriptions and even higher doses.

One of the biggest problems with opiate painkillers and what leads so many people to prolonged use and eventual addiction to them is the severe and highly uncomfortable withdrawal symptoms that they bring.

Those who have gone through opiate withdrawal will often describe it as one of the most terrible things they have experienced in their life.

As more and more people are looking to stop using opiates, many are turning to home remedies for opiate withdrawal. These home remedies include everything from single supplements and vitamins to help offer some relief for individual withdrawal symptoms to all-in-one supplement solutions that attempt to address a range of opiate withdrawal symptoms. There are also combinations of supplements that people have put together into what they often refer to as recipes, such as The Thomas Recipe.

These options offer widely varying degrees of effectiveness. Some will provide only minimal relief if any at all, while other solutions will allow someone to go through opiate withdrawal without having to put their life on hold. The severity of addiction also plays a role.

We will attempt to address all of the popular opiate withdrawal home remedies to help you or someone you know in their path to recovery.